1120 kg of ginger tea so far, to be precise. Made in seven days, but we're not finished yet. Mostly it's fun, but not on the days when I'm on a 18 hours duty. Luckily it happened only once, but three times I pulled a 14 hours working day. And I'm not using the first singular out of ego, it's just a fact that it's just me waking up in the middle of the night and walk to the next village to start cooking the ginger mixed with sugar in two cauldrons. I'm not complaining, I volunteered for it. It's well paid so I'm happy to do it. And there's always beer for me in the family factory where we make the tea.
Two weeks ago I tried to go to Japan, before the ginger madness started. Without making a reservation. Bad idea. I was sure that in this time of year almost nobody travels, but once in Busan I found out that there's nothing available for the next three days. Since it was late I went to the Blue Backpackers Hostel, just to find it had no vacancy. Luckily I'm a regular there so the owner let me sleep on the sofa in the common room. When I went for same late shopping I noticed some weird numbering on the houses in front of the hostel. 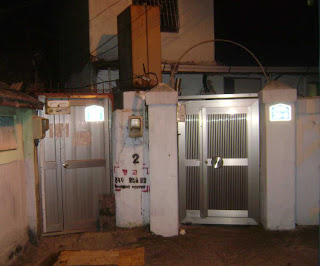 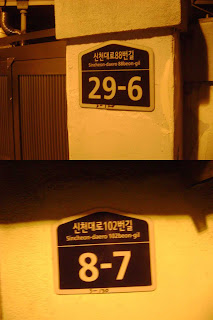 Yeah, the 29-6 and 8-7 are next door neighbors.
The next morning I went back home, with a memorable hangover. The ginger was already waiting.
For the next trip to Japan I had to be sure to make it in time, visa ending was approaching, so I asked a friend here to make a reservation. I wanted to try a different route so we booked a ferry to Daema do (Tsushima in Japanese). As things go I managed to be late for the ferry, with only 10 hours of visa time still available. The Camellia, my usual transport for Fukuoka was fully booked again, so the only chance was the jetfoil Beetle (Bitoru in Japanese). The fastest. The most expensive. The ticket was just 30.000 won cheaper than the royal suite on the Camellia. It was also 15.000 won more expensive than the plane ticket for Manila. But I was in Japan in less than three hours and - lo and behold! - at the immigration and the customs nobody asked dumb questions. They even didn't check my stinking socks. I only learnt that time is actually relative. So you go back to Korea tomorrow morning? asked the immigration officer. If so, then please write here two days of stay in Japan, not one. OK, I got this, for administrative purposes it can make sense. But deep in my heart I'm still a Korean hillbilly and 12 hours will NEVER EVER be considered two days in our village.
Just one night in Fukuoka... but too cold to join the homeless guys in the park near the port, like I did last summer. And I didn't even have my sleeping bag with me. Khaosan Fukuoka Hostel - no vacancy. So much for the time of year when nobody travels. The nearby International Hostel Fukuoka had a free bed. And - I couldn't believe it - smoking and drinking allowed in the common room! Yay!
You know, I've been to Japan eight times already. Many time just for a few hours, true, but all in all I accumulated a few months of life in Japan and I thought that I know something about Japanese food. Hell, I've been eating the most delicious miso soup for one month (not to mention other food for gods that Chika san made for us), cute little girls were almost chasing me with their home made onigiri, Okano san made some not really pickled pickles... and so on. But I never heard (or saw) about melon pan. Melon bread. Until I started watching anime. And I found out that melon pan is the favorite food of girls that come to Japan from other dimensions or galaxies, from the future or the realm of the dead. So I counted again all the remaining coins I had (Ramon, now I know why your leather jacket was always so heavy - the pockets were full of yen coins) and went to buy me dinner. 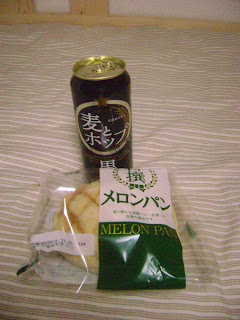 Melon pan and Sapporo stout beer. And later some umeshu.
I came back home with 34 yen and 200 won in my pocket. The ginger was waiting.
On Tuesday we were literally overloaded with ginger. It was everywhere. We couldn't peel and slice it fast enough so help was requested. To my great despair it was our village Yogi that came to help. He was worse than useless but that didn't bothered me too much. I'm slowly getting used to useless Koreans. The really bad point is that he's the one that is really compulsively obsessed with moving the dishes on the table when we eat. And when I wake up before 5 am, skip breakfast and stir ginger till lunchtime I'm not exactly in good mood when someone starts to move the kimchi I'm targeting. Yet this time I was shouting and cursing. He started moving the tables. Once, OK, I will survive. I moved my ass, too, to follow the food. Twice, OK, I will survive, but barely. I moved my ass, too, to follow the food. When I saw him grabbing the table for the third time... Not OK, you will not survive. You just fuckin' stop movin' the fuckin' table!  I shouted really loud. Way too loud since I was also a guest in the house of the Cho family, but I didn't give a shit. While everybody stopped eating in shock, Yogi looked at me with the kind of puppy-face that says "I haven't done anything bad". Ma va' a farti fottere, stronzo! Leave the table alone! I ate as fast as I could and ran back to my cauldrons.
We're off for the weekend. I took myself the luxury to sleep till 7 am. And my ginger was waiting for me on the field. Ah well... tomorrow I'll start making ginger candy.