My mistake, I meant heating the floor.
I realized I haven't posted a single picture of one of the most amazing Korean things yet. Yup, floor heating, ondol (as they call it in the northern parts) or gudeul (so called here). How many have I done? Hell if I can remember. Lots. And never took a single picture. So this time I took the camera (inherited from my son) with me and recorded all the process for all the world to see this incredible thing. You think you know what floor heating is? Maybe you even have it at home? Still, you have no clue what the right stuff is.
Koreans use the floor heating for something like 3000 years. The Romans also used the hypocaust but it was extremely inefficient and it was meant only for heating rich villas or public baths that could afford slaves to continuously burn wood in the fireplace. Excavations at Mohenjo-daro (Pakistan) and Dzalisa (Georgia) are believed to be floor heatings but even if they were, neither "survived" to the present day. Similar like many other places, the German Reichstag in 1864, for example. Nothing left of them, in terms of use. It is also known in the northern parts of Japan with its Korean name ondol and I sincerely hope that the Japanese don't think it's their invention. But, thanks to that, even the western world became aware that it's possible to enjoy heat coming from below - the famous architect Frank Lloyd Wright stayed at a Japanese nobleman's house and discovered a tea room that took on the design features of a Korean ondol room. The comfort derived from the warm radiant from the floor was so great that Wright designed a hybrid technology that would allow hot water to travel through pipes instead of hot air running through flues, which is a lot harder to maintain. Wright designed the first radiant floor heating system for a Japanese hotel, and later brought this system to America. And so it started.
But think about sitting or sleeping on a live fire. Well, not directly on it, but with a thick mass of stone and clay between, that absorbs a natural heat and releases it slowly... priceless.
If you want to make your own gudeul, here's some pictures to help you!
A new house, this is the place under the heated room. 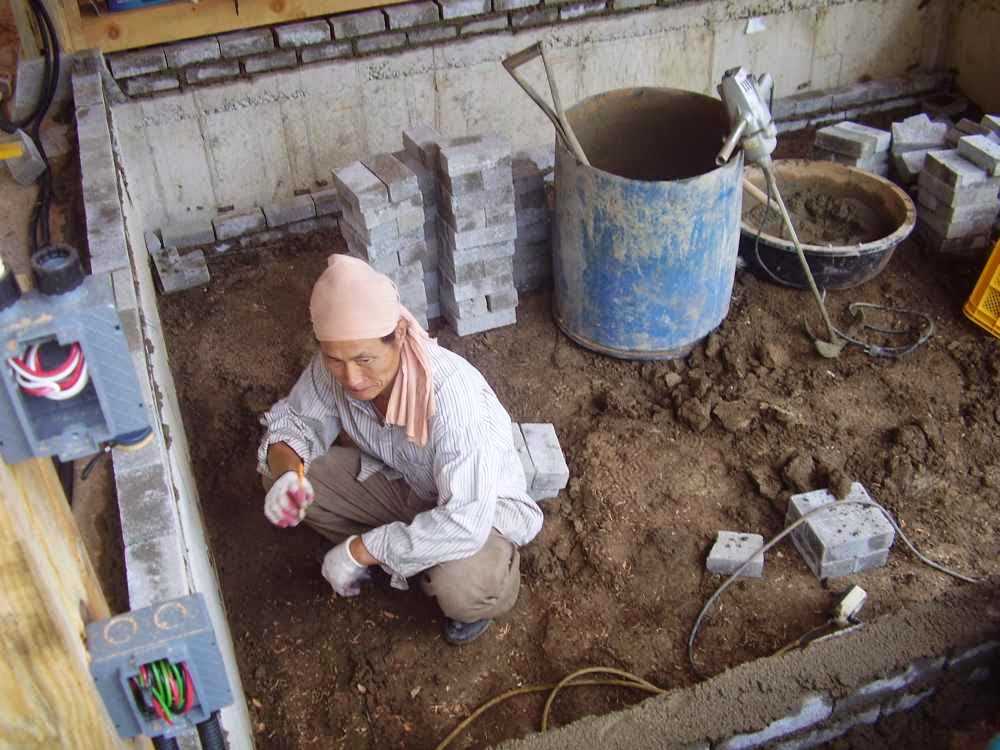 "Dag, if you don't stop messing with that camera and get quickly back to mixing the cement you'll end with an asshole like this!" 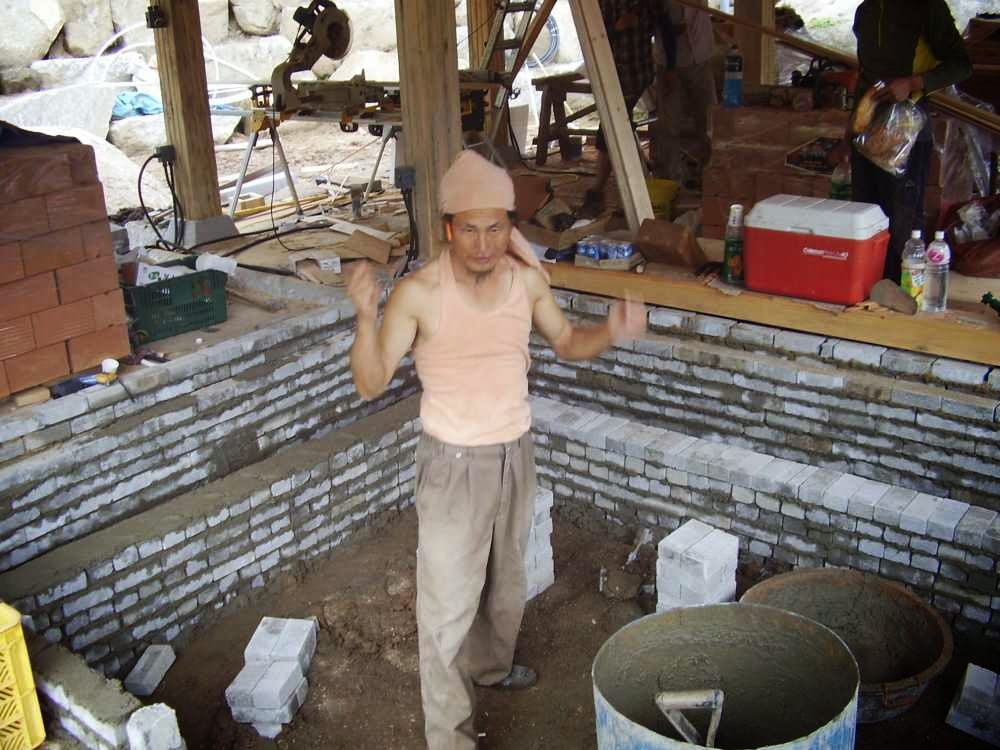 And Day 1 ended with a visit to a friend, with lots of beer and makkoli. 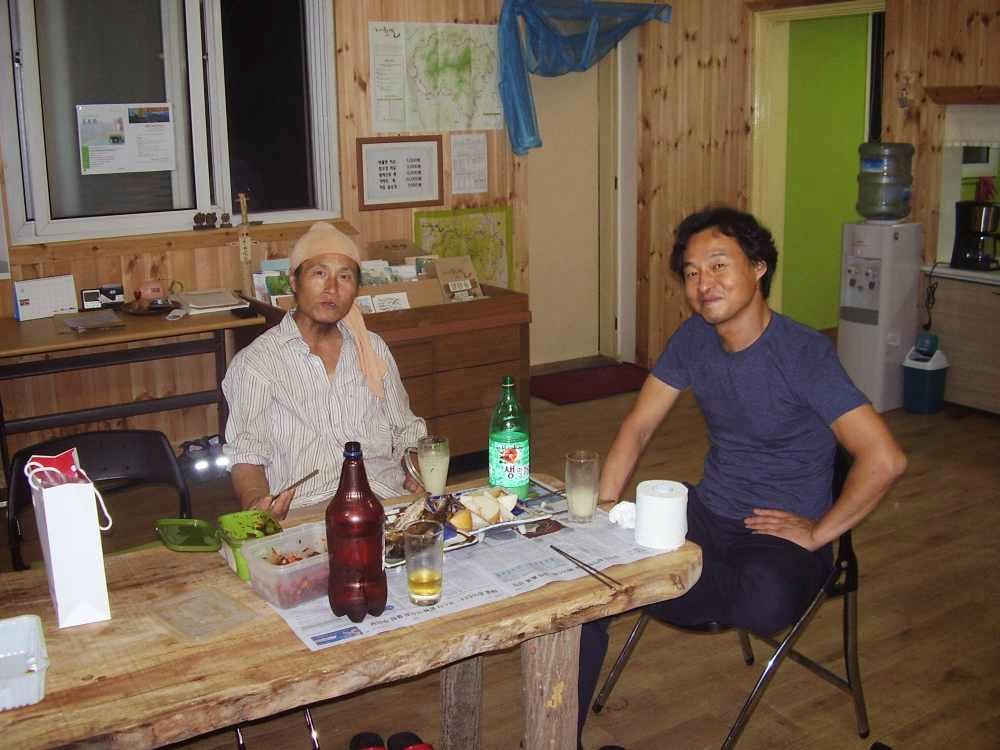 Day 2, hangovered as hell, the gudeul is starting to have a shape. 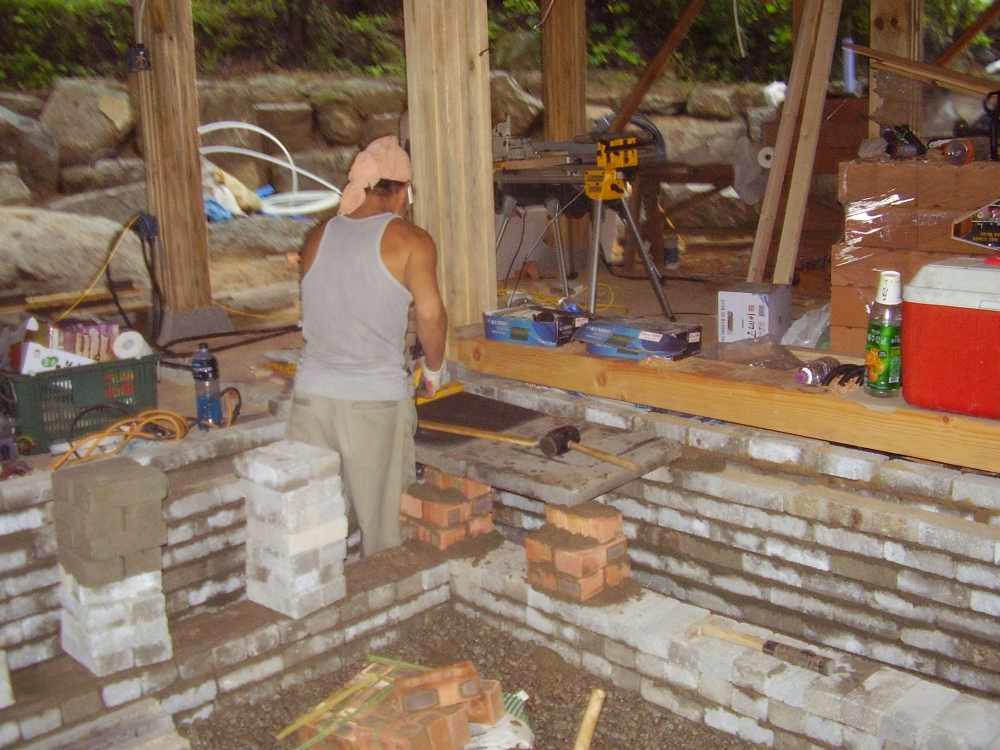 Meanwhile the wood artisans take care of the ceiling. The walls are the last thing to be done on a Korean house. All the weight of the roof is being held by the wooden pillars. 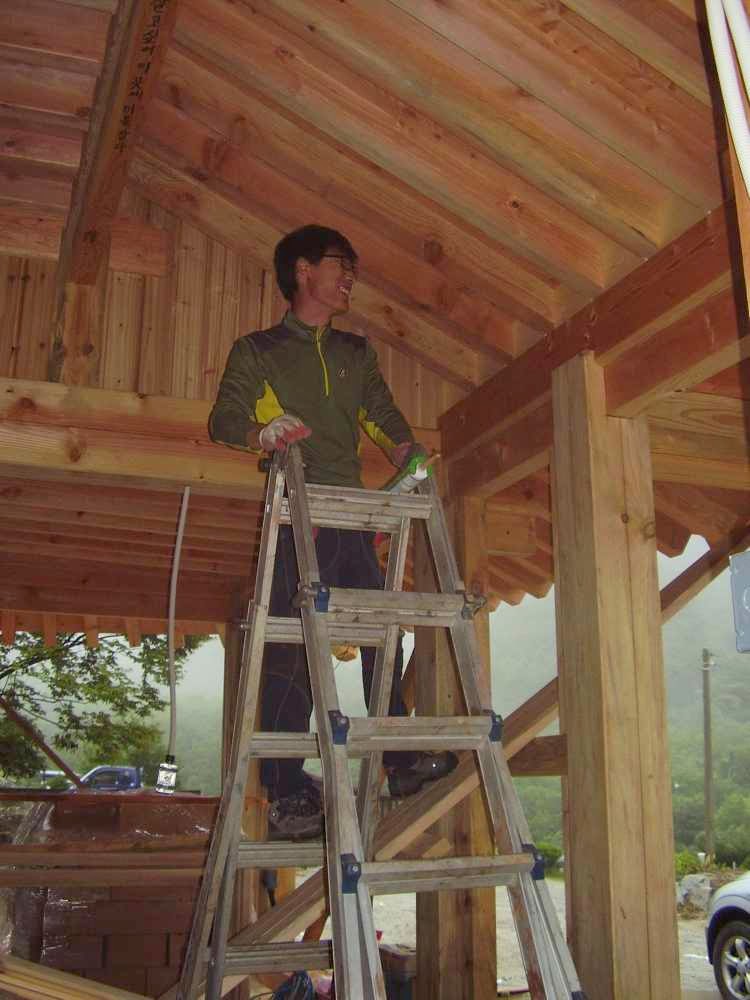 Oh, yes, I forgot we're in Korea.  Among the first things to be done is the fireplace - not because it's so important, but because this is the only easy access to the working area. After this you have to carry bricks, mortar and the motherfucking heavy concrete slabs (Made in Vietnam) all around the house or climb like a monkey. 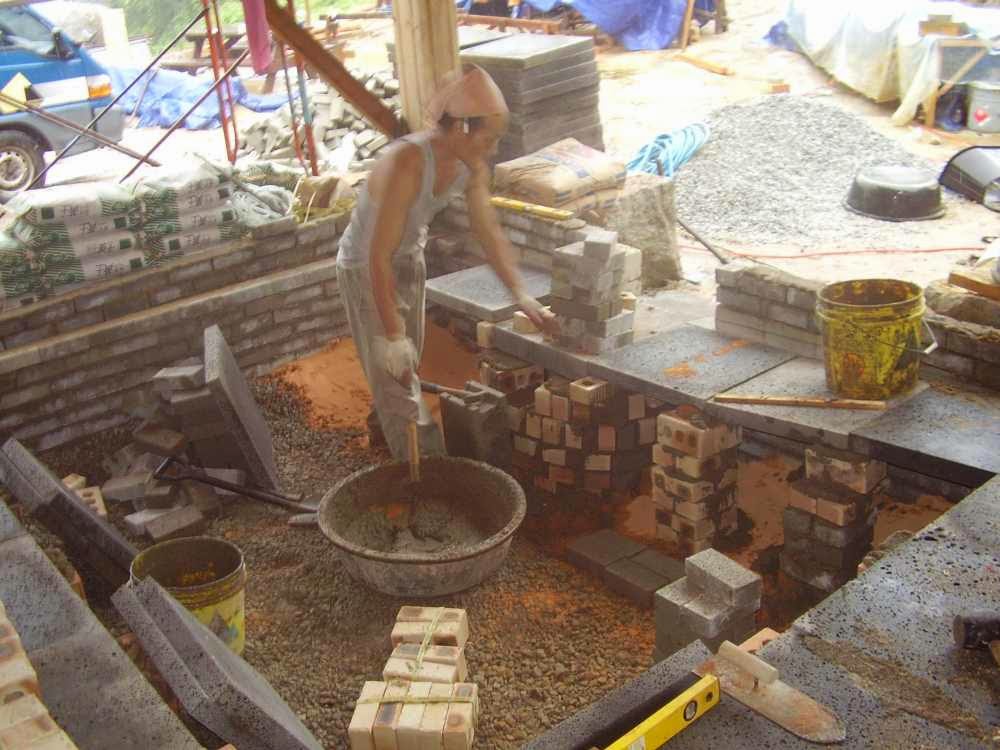 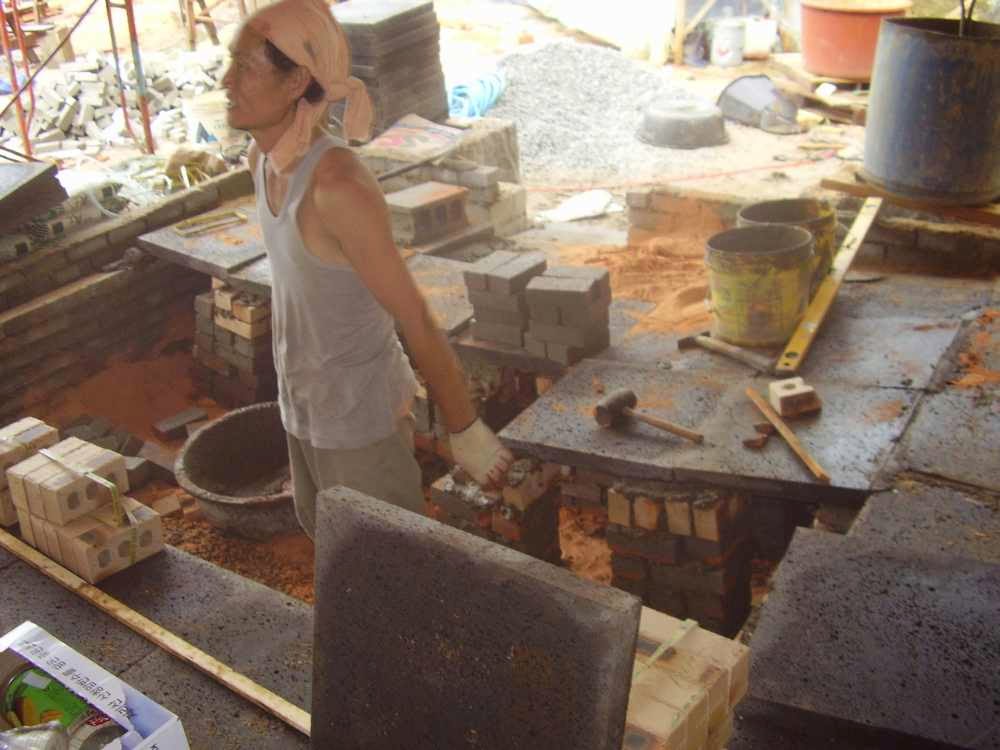 Three Koreans tying the chimney. I guess it makes more sense than five Japanese tying a laundry rope or twenty-two of them fixing a tent... 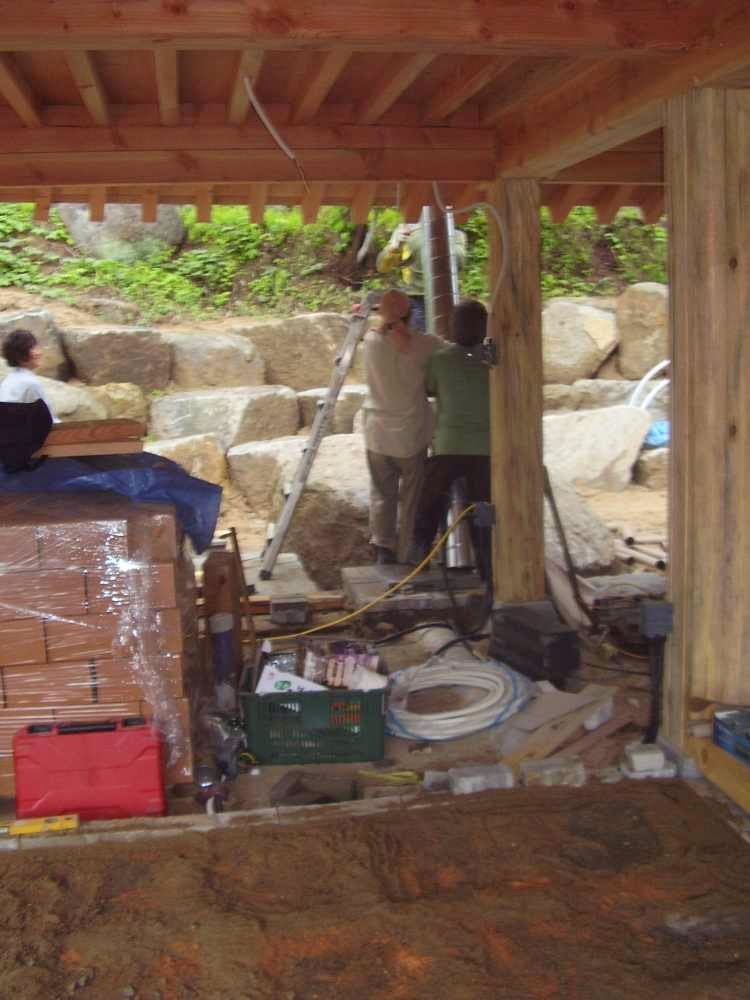 Slabs on place, covered with sand, gravel and on top the mighty hwangto - construction clay. Ready for another 3cm of clay screed, but only when the walls will be in place. 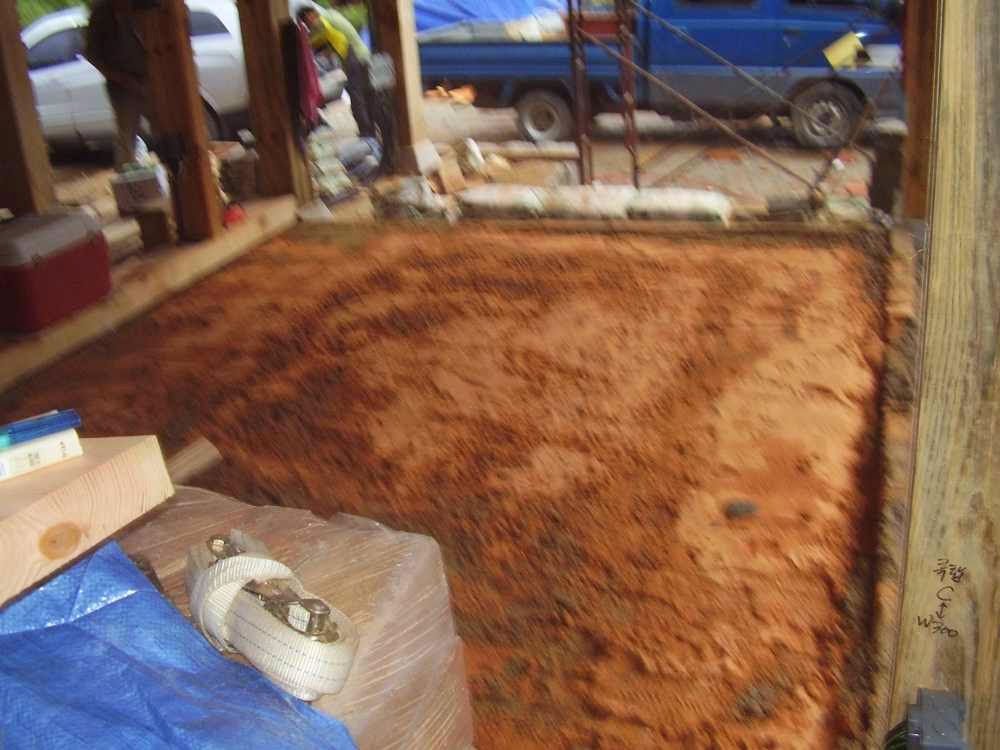 That's all folks. In few weeks I go to Okinawa and hopefully it will be a goodbye to Korea till next spring.
Avtor Dag ob 16:03 Ni komentarjev: