The Taste of Price

Two days ago I bought some dirt cheap imported wine to use for cooking. I ended drinking most of it.
But first I have to tell two stories.
One day some time ago, when Ramon was here, we had lunch at a friend's house. Lots of drink and lots of nice food, fresh kimchi, well cooked rice, uncountable side dishes.. an ordinary Korean meal. When we were all well stuffed, they started frying some greenery to have as anju (drinking snacks). It was bitter and without any special taste - not exactly disgusting but close enough to be unworthy of eating more than a sample. Wrong! It's delicious! It's the best! You must eat it! Eat a lot! It's very very expensive! Hah, the magic words. Before the big holidays in supermarkets you can buy gift packs of food: 5 apples nicely wrapped for 50 euros. 10 cans of Spam (yes, Spam!) and 2 oranges for 100 euros. And so on. And God forbid you take the price label off. It's all that matters.Koreans will just go crazy for it. The price, I mean.
And then you have Sang Pyeong, my neighbor (or my landlord, since I live in one of his houses). Last year he went to his hometown for a few days and when back he came straight to me, waving a half empty bottle of wine in his hand. No, he wasn't drunk. The day before he had dinner with a friend in a fancy "Italian" restaurant in Daejon. They had pasta and two bottles of wine and the bill was about 300 euros. Because the wine was expensive as hell. Because it was high quality. Or the other way? It doesn't matter. He paid the bill but he's no fool. A farmer, yes, but with lots of common sense. So he told himself, "I'm a Korean, I drink soju and makkoli and I know what is good and what is crap, but I have no clue about wine. I will ask Dag." Ho told me the story and handed me the bottle. "I spared some of it because I'd like to hear your opinion on this wine. Can a bottle of this be worth more than 100 000 won, in a restaurant?" I took it bottleneck. It was lukewarm, but that's not a problem for a drunkard. I'm no sommelier, I don't give a shit about the bouquet or the other fancy sounding nonsense, if it goes down it's OK. It didn't go down. Well, a little did, that's why I spat it out with teary eyes. Imported from Italy, DOC and so on, but still shit. Very expensive shit. I've never, NEVER, drank such shitty wine in Italy. Actually, I've never drank any bad wine while in Italy, even when I was buying bottles with crown caps for 1 euro or less. I suppose Sang Pyeong felt sour for being cheated so badly, but he had to laugh when he saw my face contorted in disgust. He thanked me for my wordless sincere comment on the wine and threw the bottle away. And added that I should open a spaghetti restaurant, their meal was nothing to compare with the spaghetti-party I throw occasionally at home.
Sometimes, when I go to a huge supermarket in Jinju (1 hour walk and 1 hour by bus) and I have money to waste I'm tempted to buy some wine - there's an amazing offer, imports from Chile, Australia, France, Italy, Spain, California and also some local - the last not to be mentioned. The prices? Californian Chardonnay 30 euros. Italian Cabernet 40 euros. Fuck off. But two days ago I found wine in carton in the local supermarket in Wonji (1hour walk and 20 minutes by bus). 5 euros a pack, Spanish. 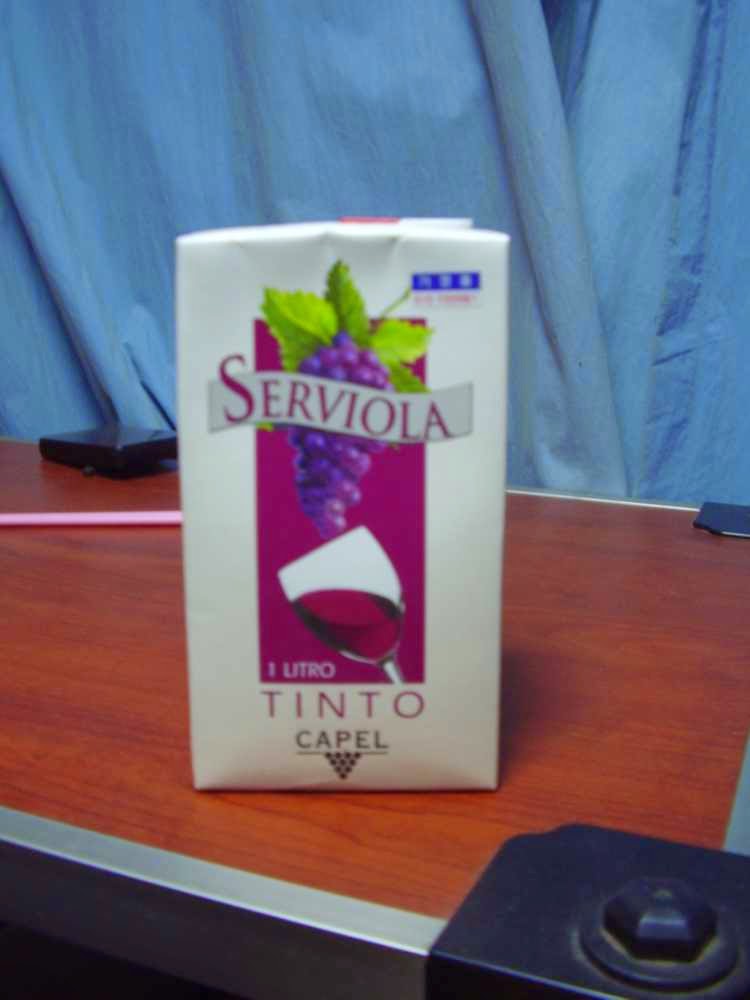 Of course it's crappy wine - but a DRINKABLE crappy wine. Not a cheat. The two weeks that I have before I leave for the Phillippines will be more cozy with lots of vin brule!