Huh, it has been such a long time I almost forgot how to make a post. I even didn't notice how the weather is starting to be really hot so I didn't keep the kimchi in the fridge. Today some 3 kilos ended on the compost heap. What a waste, what a shame.
Besides that a lot happened since I returned from Japan. Complete strangers from the nearby villages started hiring me for two or three days farming works, fair pay and too much food and alcohol. I got even a more serious opportunity, some construction work for few months, but I quit after 10 days. Building river banks may sound like a really hard work, but it's not that hard. What pissed me off was the fact that we were supposed to work overtime for free. I don't mind long working hours, I did work for 16 hours a day, but it was for money. The more you work, the more you get. This time - nope. C'mon guys, are we stupid or what? But the boss said he will treat us for dinner! I don't give a fuck about his treat, don't you notice that we're working in the rain since 7 in the morning and we had only a 20 minutes lunch break? But he said he will buy us meat and soju! And that was it. The other guys were serious about being happy with it. And I was serious when I told the boss that I don't have time to work for his happy enterprise. In the end I wasn't even paid for the time I worked. Ah, well. Fuck it. A few days later I worked with some grumpy grannies on the rice fields, they were laughingly yelling at me all the time, grabbing my ass with muddy hands, fed me during the many breaks and almost forced me to imbibe inhuman quantities of alcohol. All in one morning and before lunch I earned as much as in one 12 hours working day making river banks. Call me stupid for quitting a crappy job.
Still the best work is when I'm called to help for floor heating. The best crews, the best bosses. Guys that know their job, real artisans. Every time I learn a new trick. Not that I plan to start my own business, I just want to learn about the Korean floor heating as much as I can. Sort of a hobby, or maybe an obsession.
During this time there was also a week or more that I was sick like a dog. I have no clue what the reason was but I ended with the fear of farting because each fart was a liquid one and I spent half of the days in the toilet, the other half puking on the compost heap. Nights too. The good part is that I lost quite a lot of weight.
My field is doing well, too. Onions and garlic that were plated before leaving for Japan are growing slowly, but steadily and they can't compare to the huge ones that my neighbors have. But My peas are triple the height of theirs and also my potatoes are growing better! 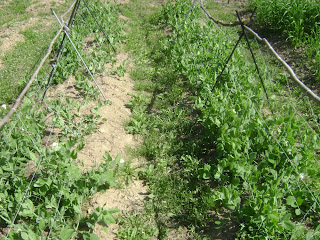 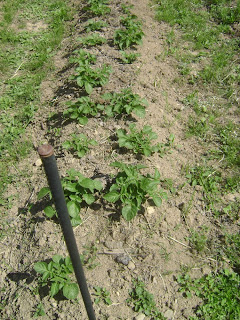 But I'm most happy that my tomato seeds are fertile and I planted 309 plants of marmande and cuore di bue. And the rutabaga I left from last year for seeds is in flower, so I will not need to ask friends for seeds. 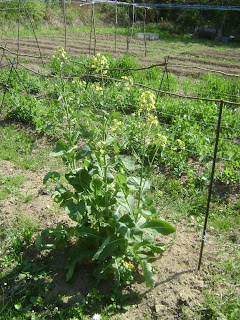 The oregano is also growing and I'm struggling to vegetatively reproduce a small bush of rosemary that I found at a florist shop - they were selling it as an exotic ornamental plant.
And now the most important part of this post, which actually made to write it. I started my Saturday work in a church. yes, you got it correctly. Me is working in a church. A protestant one, but it's still a church. Clearly, I was tricked to do it. Jokes apart, there was no trick, just my dumbness when it comes to Korean language. I was asked if I was willing to share some of my time to play with and teach English to kids from poor families. Few hours, two times a month. Hell yes, of course I do! OK, tomorrow we'll go to visit the guy who's in charge so you can discuss on how and what you'll do. Cool and great... but it was a Korean arrangement. We arrived in Okcheon (an hour drive) after lunch, I was introduced to a really kind guy (I swear I didn't notice the cross on the roof of the building) and was almost pushed in a classroom with 12 kids. So much for the discussions. It's not that they were testing me, it's just the way they do things. It took me literally less than 10 seconds to feel at ease. There was a blackboard. There were chalks, of different colors. And there were kids, ranging from 8 to 18 years of age. The older ones amused, the little ones afraid, looking at this scary foreigner in front of them. I gave them a big smile from the bottom of my heart and the older ones were even more amused, the little ones were not afraid anymore. And we did it, three lessons of 40 minutes each in one afternoon and in the end the little ones were crawling all over me, making me feel heavenly - even if I made a terrible, unexcusable mistake, that initially made them cry. I was so excited that I forgot that the kids can't read or write romaji. I bitterly realized what a moronic mistake I've made only when I saw them crying when they were not able to copy a word from the blackboard. My luck that the students are better than the teacher, I was forgiven quickly (I suppose that the strawberries and chocolates helped the forgiving). After the lessons we went to play football and then I was told that the kind guy in charge is the pastor. Then I also saw the cross on the building. After a few words with the kids he asked me - 10% in English and 90% in Korean - if I liked it and if I want to go on. Hell yes! (I didn't actually said hell) Every Saturday? Hm, do Saturdays occur only twice a month in Korea? But who cares, yes yes and yes, every Saturday! Good, because the kids were happy, so now I need only a copy of "something" before you start. There goes my Korean. A copy of what? I made clear enough that I don't have an university degree, that I only have 20 years of teaching experience. So the only copy that I found normal to be asked of, was a copy of a document. After all, I was a complete stranger - and foreigner, to say it more - left alone with children. Of course, I wil bring a copy of my passport next time...  No, no, I need a copy for money... WTF, now you want me to pay for teaching here? As you can guess, I got it completely wrong. He wanted a copy of my bank account to pay me. WTF again, dude, I accepted to share a few hours of my time with kids from poor and problematic families, some of them immigrants or from mixed families, you devote ALL of your time and resources for them and you want to pay me? Yes, because for the time we have a generous sponsor and part of the money is meant for education, that money is for you. It's not much, but as long as we have it we'd like to keep you. Not much, huh? For three hours almost the same as 12 hours of riverbanking in the rain. I have to ask for the sponsor company, I will advertise them here for free. Not for my pay, for all the money they give for the children - food, school supplies, clothes. The place looks like a part time orphanage. So the money will be routes through a friend's account and I also made it clear enough that even if they will loose the sponsor I will be willing to come every Saturday (if someone will give me a lift).
It's Monday and I'm already excited about Saturday. I shall bake some special cake for my students.